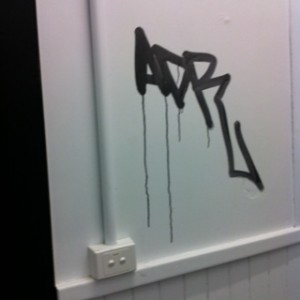 Now the renovation of my office is finished, I’m allowed to go back to Zoo station.  I was looking forward to enjoying my freshly painted new office. So you can imagine my disappointment when lo and behold, I opened my new meal room door, to be confronted with

Graffiti!!  My God it gets everywhere. And why can’t they paint something interesting.

But inside the office!! Did it slide in under the door?

I assumed that some kids had got in while the workmen were there and that there was nothing to worry about.  I started using the cosy little meal room as my office and leaving my overcoat, my uniform jacket and safety vest there in the evenings.

Until Thursday when I opened up the office door and discovered my clothes and the fire extinguisher were no longer there. I’d been robbed and by someone who’d painted a smiley face on the door. (Make a defiant gesture at me, why don’t you?)

Oddly the microwave and the other electrical appliances where untouched.  At first I couldn’t believe what had happened.  I thought maybe my aged brain had forgotten where I had put the coat or that a work mate was playing a trick on me.  I looked inside the fridge and the microwave and everywhere else.

Why steal my uniform?  When they came, the police told me that Metro uniform is the outfit of choice for graffiti artists loitering around rail yards hoping to tag trains.  I was oddly comforted to think of my clothes leading this outlaw life instead of just being dropped in some dumpster.

The meal room is separate from the office and low security with no alarm.  It can be accessed by a key that’s easy to copy.  All sorts of maintenance crew have these keys so that they can use the toilets next door. Apparently other less savory people have keys too.

The strangest part of the whole story was that my overcoat turned up again.  A kindly passing golfer picked it up on the golf course and brought it back.  It was so wet with rain it took two days to dry out.

I wish the suit jacket had turned up.  The old one was very flattering to my figure.  The new one just makes me look dumpy.  (yes I am that shallow :)) 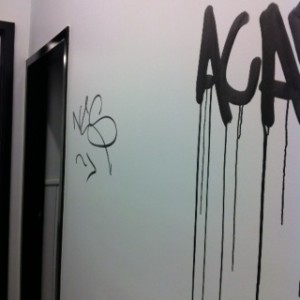