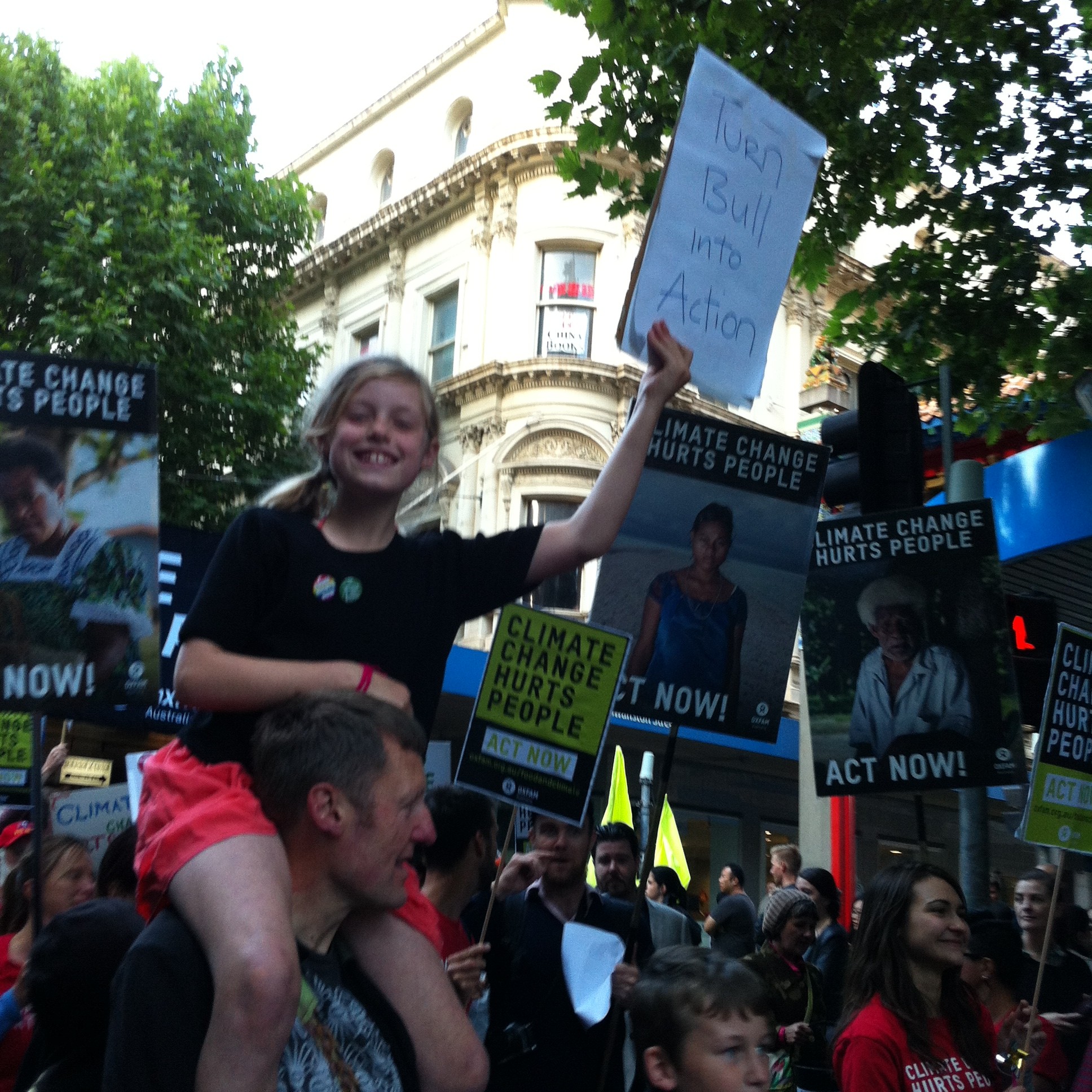 Several people who asked for help with tickets on Friday afternoon were clearly going to the Climate Action March.  One lady had put a green beanie on her 6 moth old baby and told me fondly, “We’re meeting up with daddy first. It’ll be her first march.”

By the time I’d signed off at work and got to Melbourne Central, the speeches were well underway and the crossroads and the state library square were packed with people spilling over to the other side of the road.  Banners were everywhere.  Schools, Unions, the Quakers, the farmers. 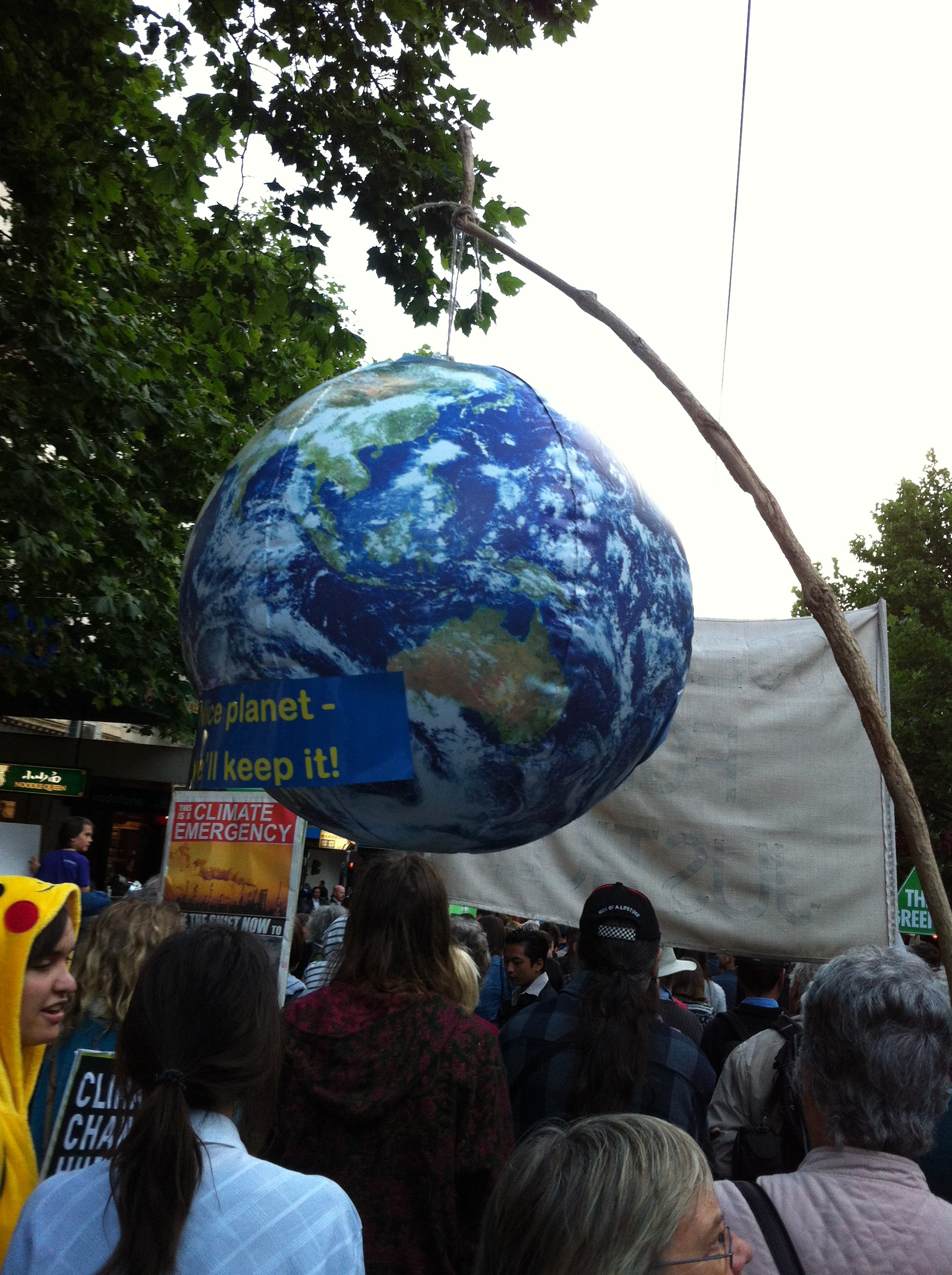 You can never hear the speeches so we usually just cheer along with everybody else.  I caught up with people, met my sister and came across various long lost friends in crowd.  The teenagers were playing some kind of chasey through the crowd. A friend from the country told me this seemed like a huge crowd.  I thought it looked pretty respectable.

Meanwhile people moved in and out of the station as normal intent on Friday night dinners and dates. Why couldn’t they stop and join in?

After about ½ an hour we started to move off.  Like a big slow beast lumbering to its feet, the crowd got down onto the tram tracks and started shuffling down along Swanston Street.  Though moving slowly the atmosphere was cheerful and the crowd was full of families and kids – all happy to feel that they were doing something, anything to make a difference to a seemly insoluble problem – to address the sense of overhanging doom troubling them.  Much like those who marched against Wars and the bomb must have in the past. 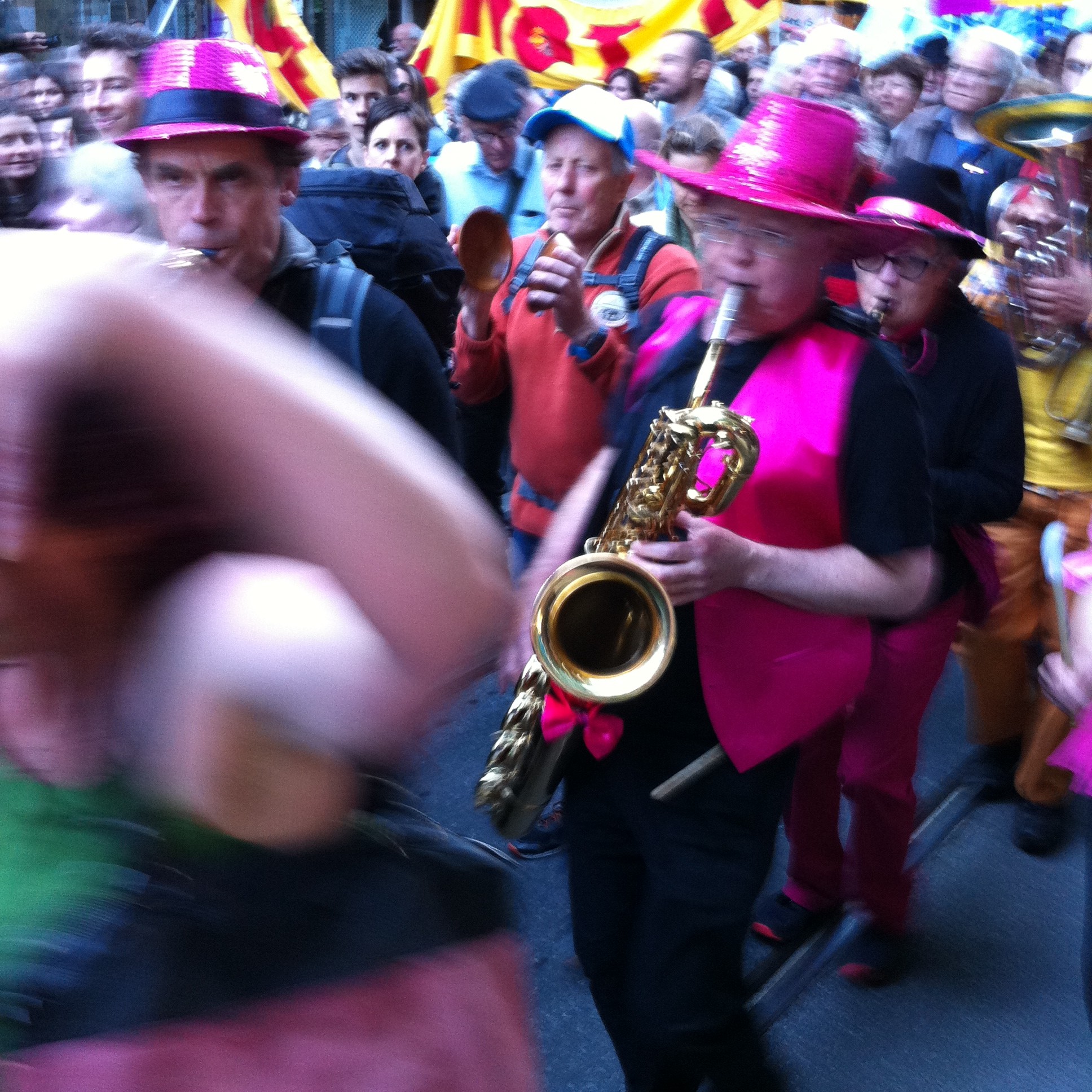 Midway down we came upon a friend perched on a traffic island looking for his wife and joined him watching the passing parade.  There were bands and dancers. The Tibetan and the Polynesian communities danced past and so did the Christians.  There were fabulous banners and sheets painted with poster paint – a huge set of scales weighting coal against renewables being wheeled along on a trolley by three people and a hills hoist covered in little signs. 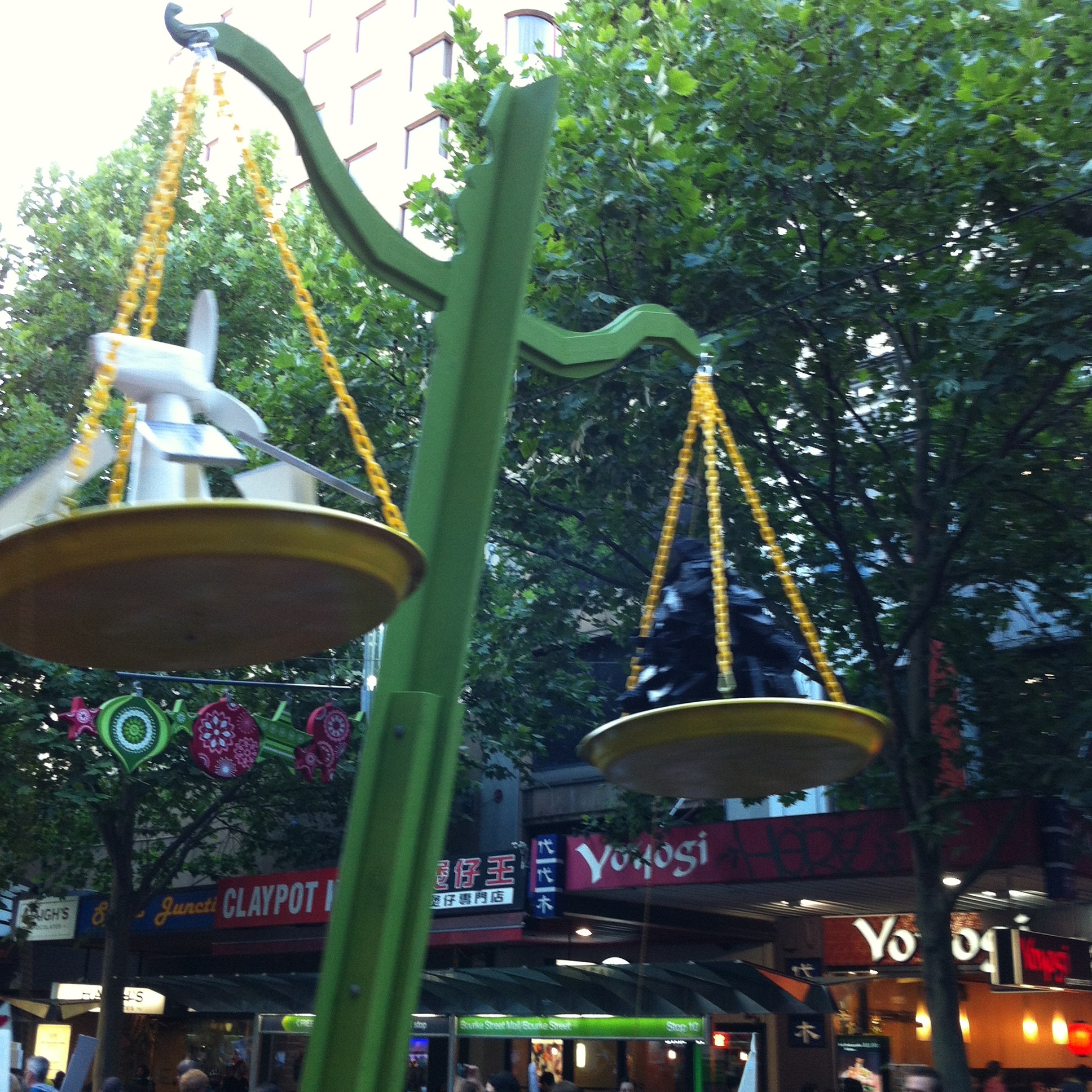 There were Climates and Climate angels, Christians and the Trade Union choir.  There was a young girl anti plastic bag demonstrator in a grey plastic bag dress.  I saw the leader of our opposition Bill Shorten and his family, trailed by three policemen and the Climate Action wing of the Labour party.

I’ll vote for you I shouted. He made eye contact but I’m not sure he believed me. 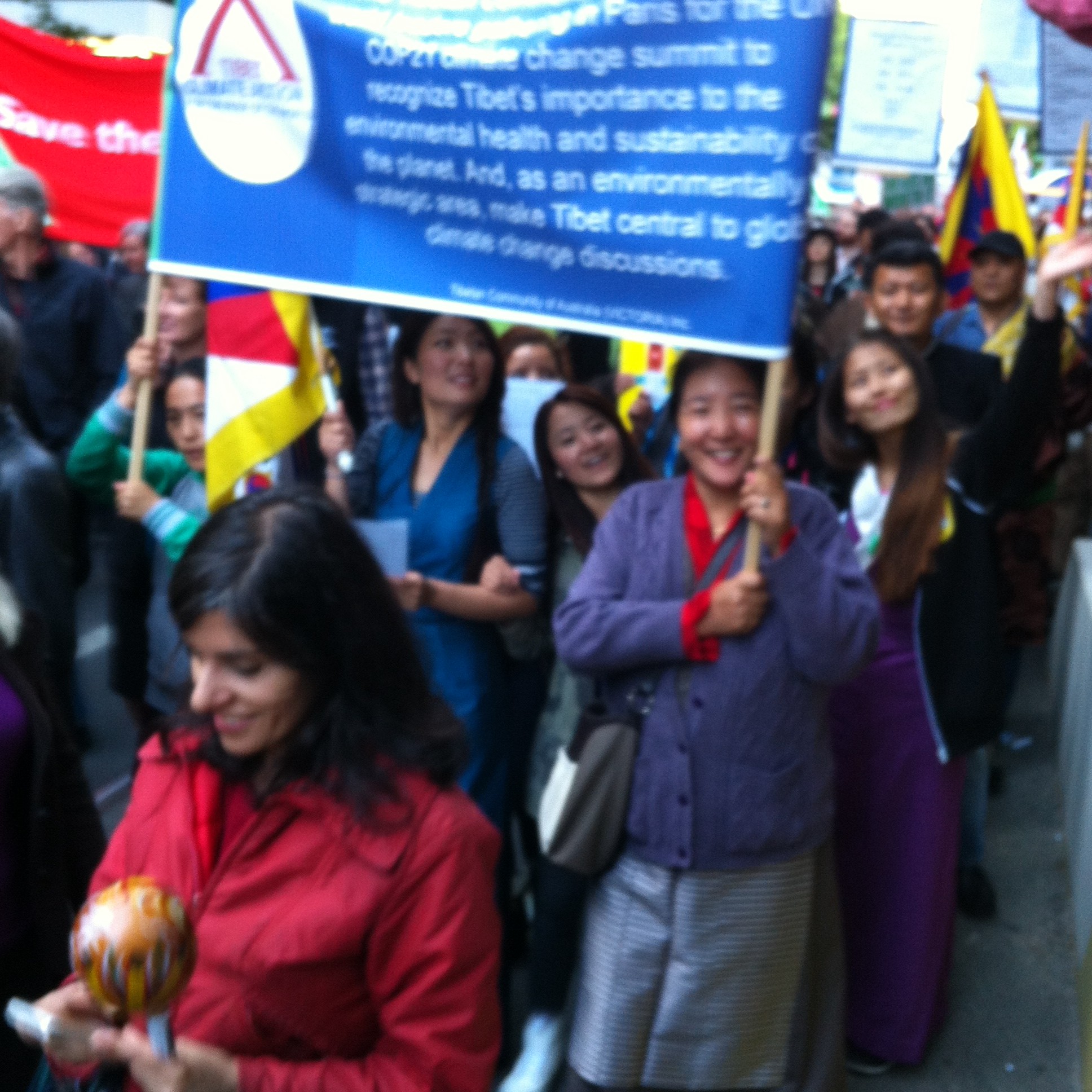 “Fossil fuels have got to go,” and

When we reached the steps of Parliament house, the organizers told us there were 50 thousand people here.  So many of us.  Why does no one listen? We struggle away wearing away our leaders like water wears away stone and inch slowly forward and we just have to keep going no matter how tired we get.  . 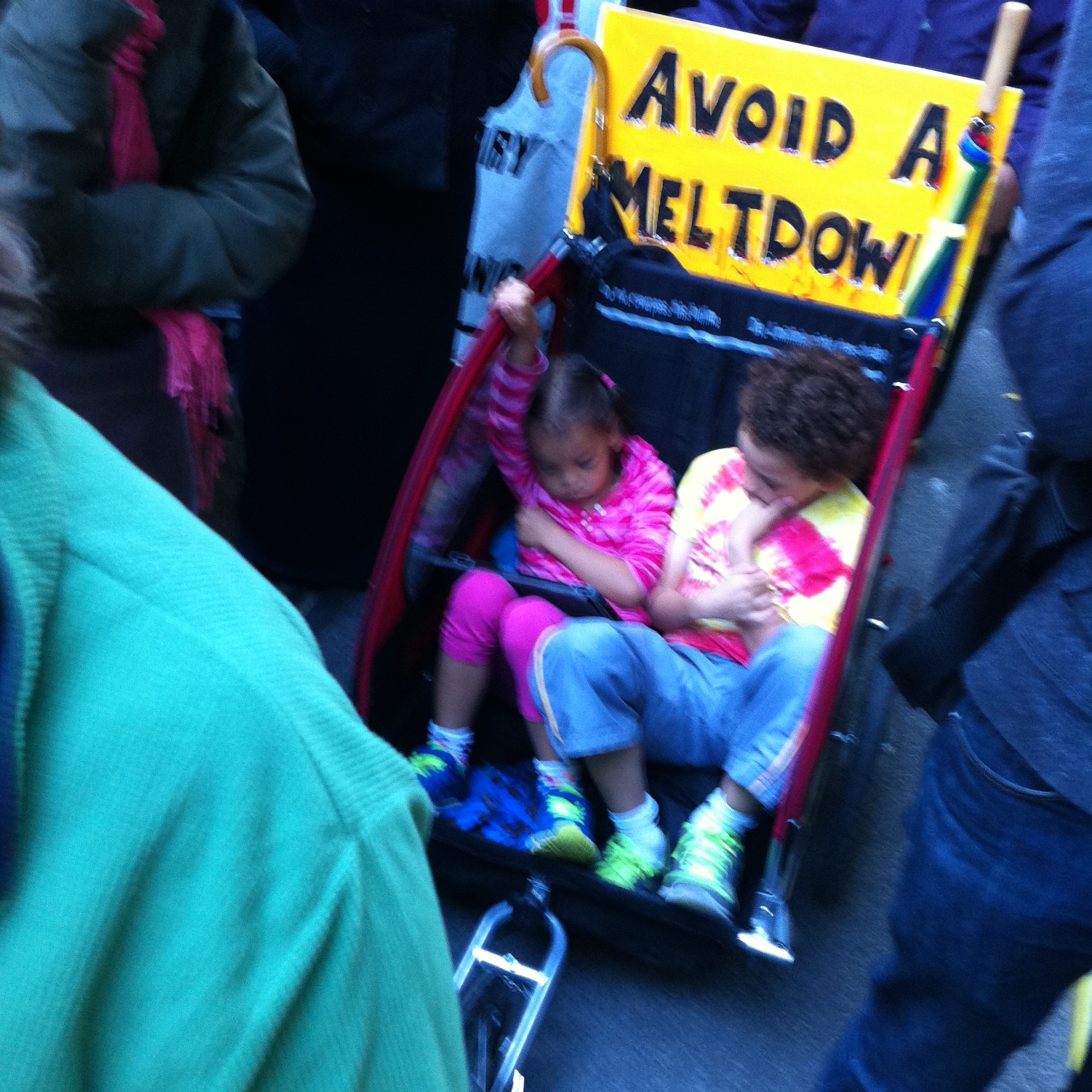 Japanese tourists have been a feature of my week. The Zoo seems to be crowded with beautiful and beautifully dressed young Japanese couples. The women especially wear lovely little dresses or little skirts and matching blouses and high heels to visit the Zoo. Honestly, I don’t even get that dressed up for drinks. I think they may be honeymooners or on wedding tours. Some days Melbourne’s beautiful gardens are full of young Japanese brides and grooms all dressed in white and tuxedos taking their wedding shots.
In an act of super tourist guiding this week, I appear to have made one young couple’s day. They asked me what else there was to do in Royal Park and I pointed out there was a golf course.
“But we’re not well enough dressed to play golf,” they said.
“This is Australia,” I said. “I’ve seen men playing golf here with no shirt on.” (And I have. May God protect me from such sights)
“I can play golf but you can’t,” said the man to the woman.
But he seemed a little reluctant to play. Still I looked up the prices which were very reasonable. It’s a public golf course.
“Let’s play. Let’s play,” said the woman.
They wandered off and sure enough 20 minutes later they were happily waving at me as they went past with their hired buggies. I wonder if the game got their marriage off to a flying start or blighted it at its beginning. Golf can be a pretty fraught game. Alas I shall never know. 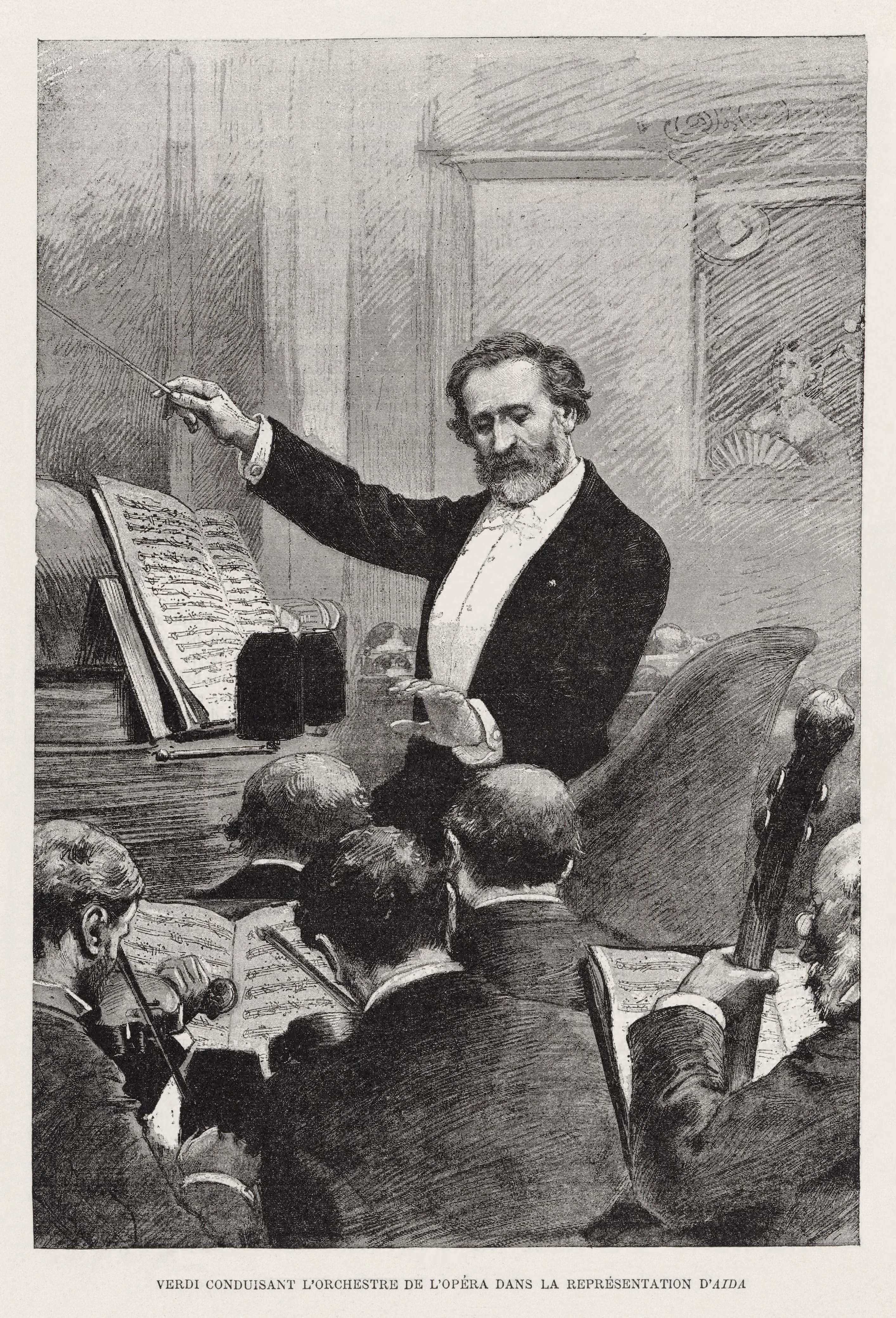 Recently I’ve acquired a new regular at my station. A little man in his fifties who conducts – not trains but orchestras. Where ever he goes he plays band/orchestral music on his mp3 player and he conducts to it waving a long white baton. He conducts while waiting for the train, on the train and when he gets off again. I don’t know what he does at other stations, but watching him coming down the platform at you waving a white baton delicately held between his thumb and forefinger is as dynamic as seeing Harry Potter coming at you waving his wand. The Conductor is very fit looking which is not surprising as he conducts with his whole body. I’m no judge of the quality of his conducting.
Recently I ran into him at another station and he recognized me. I was on my way to work and wearing my uniform. He wasn’t conducting so we chatted and I asked him what he did. He said he was coming from a class. He said he taught percussion and trumpet and that he was also a guest conductor at a major symphony orchestra. He told me he’d had guest spots in Vienna and Paris this year. He described how hard it was to become a conductor. He was intense, but seemed complete in his world.
I’m keeping an open mind. I suspect, as do most of us on the line, that this is all fantasy, but I always keep an open mind about these things. It’s rude to tell someone they’re fibbing and you never know. It might all be true. Stranger things have happened.