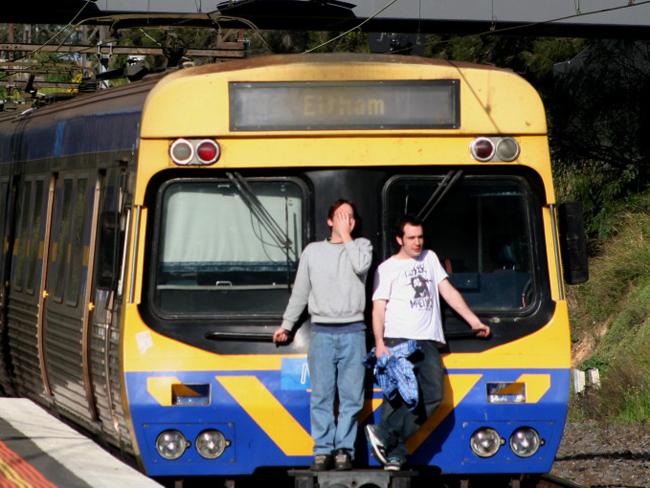 The 3.04 stopped and the driver got out and took a walk down the platform.“I think there’s kids riding on the rear coupling,” he said as he went past. Sure enough as he got further down the train, three youths jumped off the end of the train. Giggling they leapt off the furthest end of the platform and ran into the bushes beyond.

The driver came back and the train left.

A couple of minutes later I heard yelling from the nearby tram stop. Two youths were hanging onto the back of a departing tram while a third ran alongside trying to get onto the running board. How on earth did these guys survive? But they must have because no ambulance came. They also showed an impressive turn of speed in running that kilometer between the far end of our platform and the tram stop.
I’ve started checking the back of all the trains more assiduously because kids ride on the couplings regularly (a couple of times a month I see them) I recently caught one trying to get on a coupling on the opposite platform and was able to drive him off with a shout and a glare. (he was clearly too young to ignore me, about 15)
Once a group of them inside the rear carriage saw me checking and started waving and blowing me kisses. Hard not to be softened by their cheekiness.
I understand the appeal of riding on the rear coupling, I really do, but if you fall off it’s a long way down and fast and the trains have to stop while some poor para-medic scrapes you off the tracks. 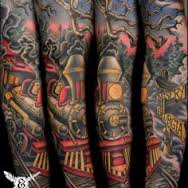 Back at work after a holiday. Blah!
But we amuse ourselves as best we can. Yesterday I got talking to one of the regulars, a highly tattooed man with a false leg who attends the nearby physio classes.
He wears tattoo sleeves on his artificial leg so that it matches his real one and I must say it’s a good way of disguising it. Also I find people with only one leg tattooed always look as if they are limping.
While he was telling me you had to be tough to get tatts, a woman on the other side of the waiting room pipped up and said it didn’t hurt all that much. Soon she was telling us how she drew a tatt in texta on her ankle back in the 70’s (“when women didn’t get tatts”) for two weeks just to try it out and see if she could handle the attention. Apparently she could, because she had lots now. The two of them got talking and when the train came they got on together still talking. Have I created a relationship here? Maybe started a true love? Probably not. But it’s nice to dream.