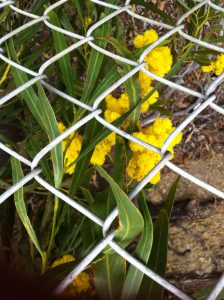 They had some kind of special meeting at the youth mental health clinic yesterday. At least a dozen dazed looking young adults with protective parents in tow came through.
One sweet faced, and clearly heavily medicated, young indigenous man wanted to chat and asked me all about myself. It was he who told me of the mental health clinic. He was there with his dad, and his dad’s mate and they were by far the most disadvantaged looking group of the whole lot. Their clothes were dirty and shabby and the older men had that toothless, scrawny, underfed look that the chronically poor get and hands covered in homemade tattoos.
The young man told me about his mob and sleeping at the Salvos, the father, who was Irish, told me how he’d been at the local juvenile detention center on – an ironically named- Care and Protection Order back when he was 14
Suddenly the dad’s mate who’d been sitting quietly reading one of the books from the children’s library, jumped up and started rushing around, picking at the scabs on his hands and looking for somewhere to wash them. By the time the train arrived, he had his top pulled off and was scratching his already very scratched looking back with a piece of stick.
But they were all lovely polite folks and the young man was so very glad to have his father there to support him.