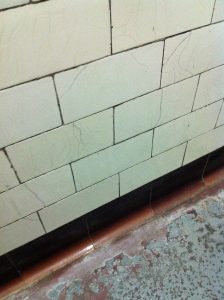 Its 22.30 one Sunday evening and we are once again chivying people off trains and onto buses so that men can work on the tracks.  We tend to do a circuit of the quiet station calling out,  “Replacement buses outside the station,” to everyone because no matter how many announcements they make over the PA, someone always misses them and gets angry about there being – “No announcements!”

My Indian workmate is going down the escalators ahead of me and coming up towards us on the opposite escalator are an ordinary-looking elderly couple in their 60’s – probably someone’s Nan and Pop.

“Replacement buses outside the station!” she calls helpfully to them as she goes past on the escalator.

And the man turns and says calmly to her retreating back –“Don’t yell at me, you black c**t!

I’m shocked, appalled and unfortunately speechless.  I glare at them but they don’t meet my eye as they go past. They are as expressionless as if he’d said nothing – bored people on an escalator.  Is saying such an awful thing just every day for them?  Like shopping?

I should have said something.  But perhaps she didn’t hear him and if I’d spoken out – called him the racist bastard he was – she would have known what he said.  And no one needs to hear that.  But if she did hear it and I said nothing, what will she think then? That I agree?  That would be awful!

I say nothing to her and she doesn’t mention it.  She doesn’t seem upset.  Maybe she didn’t hear him.  Or horrifying thought – she’s used to it.  We do get a lot of abuse on these bus nights and it must be even worse if you stand out as different.

But I should have called this guy out as a racist bastard.  Shoulda! Shoulda!  I’m so furious when I think of it.  Why did my words fail me at the time?

6 thoughts on “On casual racism”