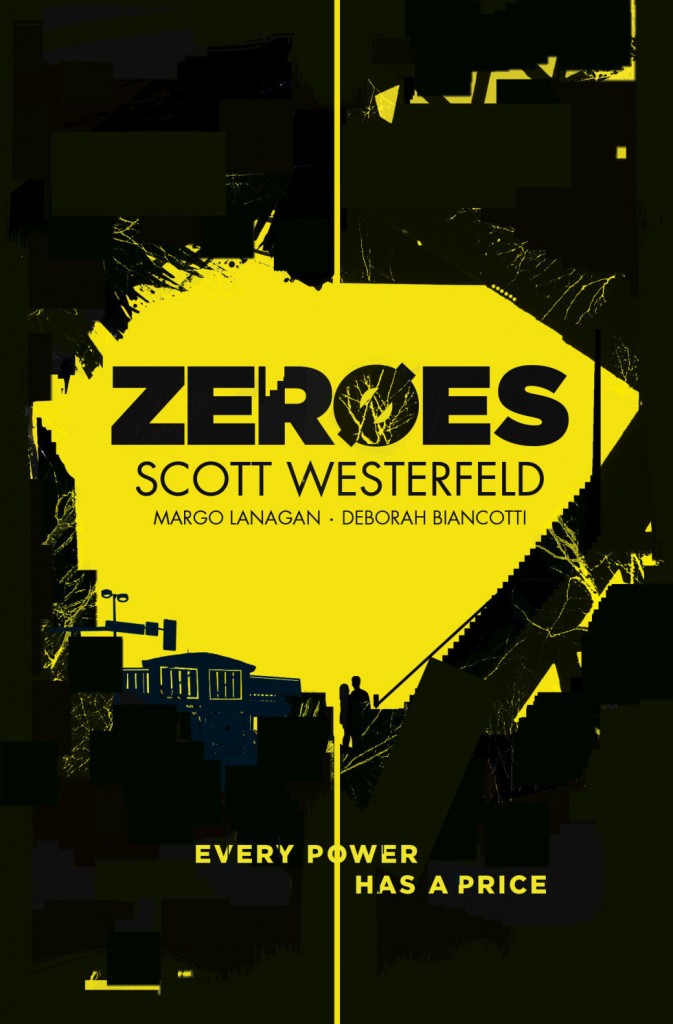 Tell us about Zeroes.

ZEROES is a YA trilogy about six teenagers, each of whom has a different socially based superpower. Which means, the bigger the crowd around the character, the greater their power—and the bigger the mess if they stuff up. And they do stuff up, regularly. Each (short) chapter is told from one of the six points of view. Compared to the average solo Margo Lanagan story it’s pretty helter-skelter, and not so dark—although it seems to be gradually darkening as the series goes on. Maybe I’m having more influence than I think!

How did the three of you manage the creation of a single book together? What was the process?

Each of the three authors wrangles two of the characters. We get together for a few days to plot out each book, then scatter to our respective homes (e.g. Scott is spending most of this year in New York) and write up our chapters. Then comes the fitting of those chapters together, which entails a lot of rewriting, but also kicks the ideas into new dimensions of weird and intense.

What initially inspired you to write about these young superheros? Can you focus on a particular moment?

I wasn’t present at the very  beginning—I was a late ring-in. But this is how I’ve heard it went: Scott had had the idea for one of the characters, Scam/Ethan, for a very long time. Ever since he was a teen himself and wishing he was the kind of kid who always knew the right thing to say in any given situation. He’s also got a lot of mates who were involved in writing for film and television, and he’s always been envious that they had a roomful of people to bounce ideas off and share the load.

Deb had just done a workshop at AFTRS (Australian Film Television and Radio School) on writing for TV, and she was pretty interested in the TV Writing Room model too. They got to talking, and wondered if that model could be used to generate a co-authored novel. Scott tossed Scam/Ethan into the mix and they started chewing over the crowd-sourced superpowers idea.

They invited me to join them when they realised that two people did not a Writing Room make. By then they had a few more of the superpowers worked out—but we started out by sitting around in bars dreaming up the rest and wondering how this collaboration might work. A few months in we started writing—a year later we delivered the first book. Now the second is written—due out October in Australia—and we’re putting together Book 3.

What else are you currently working on?

I’ve got three short stories on the boil, which are going to be added to a best-of collection coming out from Allen & Unwin next year.

How do you start out with your stories?  In the middle, beginning or end?

I start at the beginning, mostly, but I need to have some idea of where a story’s headed, to keep it moving. Once I reach that end point, sometimes I realise it’s not very climax-y, or, going on what I’ve already written, I can push the action a little bit further and make it more interesting for myself.

Then there are other stories that don’t present themselves so tidily. Some have to be built up all out of order, from little mosaic pieces. Some can only be completed after the first four attempts have cleared some non-functional ideas from my head and I’ve gone desperately searching in the undergrowth for something else that might work. Some have to be fully drafted, put aside for an unpredictable amount of time, and returned to with a different mindset.

What’s your writing process for your solo books? Do you throw a lot away?  Do you write every day?  Are you a planner or do you fly by the seat of the pants?

I throw a lot away. A lot. With Tender Morsels and Sea Hearts I rewrote heaps after both editorial passes. It felt like a process of excavation, as if each round of questions asked of the novel gave me permission to break up what I’d done and dig deeper to find the real heart, the point of the thing.

Then there are times when you’re stale and bored with your own voice and it’s best to go out and be in the real world for a while, to exercise and travel and take in other people’s words (and pictures, and music, and actions). Every writer has to work out their own rhythm for themselves. Don’t write every day if it turns writing into a chore.

I’m a very rough planner. For a novel I start with a plan simple enough to keep in my head without writing it down. I throw a bunch of scenes at that until I feel as if something interesting is forming, then I rehearse a bunch of different plans to see how I might bring all the scenes together. And I repeat that pattern, if it could be called anything so coherent, jumping from pantsing (just going for where the energy is) to planning (when things need reining in) until something like a complete story seems to emerge. Then I send it to the editor, and they go “Yay!” in some places and “Wha—?” in others and I plan-and-pants my way through answering their questions.

Your work often seems to be focused on gender relations.  Has this always been an interest and were you able to explore it in your early teen romance writing as well?

Not so much an interest as a site of rage and fascination. And God no, there was no proper exploration of gender relations in the teen romances. Only the merest touch of feminism-lite could be seen there, on the way to the happy-ever-after ending.

Probably the gritty-realist YA books I published in the mid-90s (The Best Thing and Touching Earth Lightly, now available as e-books) were me at my most I-will-now-change-the-world confident, although Touching Earth Lightly has an unfortunate plotline where the sexually active girl dies. Since then I think I’ve wised up as to how entrenched the patriarchy really is in our and other societies.

Still, I have hope. Germaine Greer once said “Women have very little idea of how much men hate them.” Well, now, because we have the internet, it’s being made abundantly clear to us, and to some appalled men, how hated we are. And isn’t it always useful when your enemy identifies himself?

How do you go with social media?  What do you do to increase interest in your work and how much time do you spend on it? Any tips?

I go with social media as far as I enjoy it. That means at the moment that I’m on Twitter and Facebook. I think we can say I don’t maintain my own blog any more.

Leading up to and crescendo-ing slightly after pub date, I repost any buzz that I catch sight of, and write a lot of guest blog posts and do a lot of interviews. I try not to let either account be totally taken over by publicity.

That’s my tip about using social media—don’t be seen to be “using social media”. Stay human out there; grumble and joke about other stuff in between pointing people to guest blogs and cover reveals. Naked authorial neediness is not a pretty sight.

I don’t think I can narrow it down to 3, so I’m just going to blast you with some visual artists: Louise Bourgeois, Linde Ivimey, Goya, Lucy Culliton, and those mad giant landscapes by William Robinson. Oh, and Scott and Deb seem to think my teenage crush on Mervyn Peake’s Gormenghast trilogy might explain a few things.