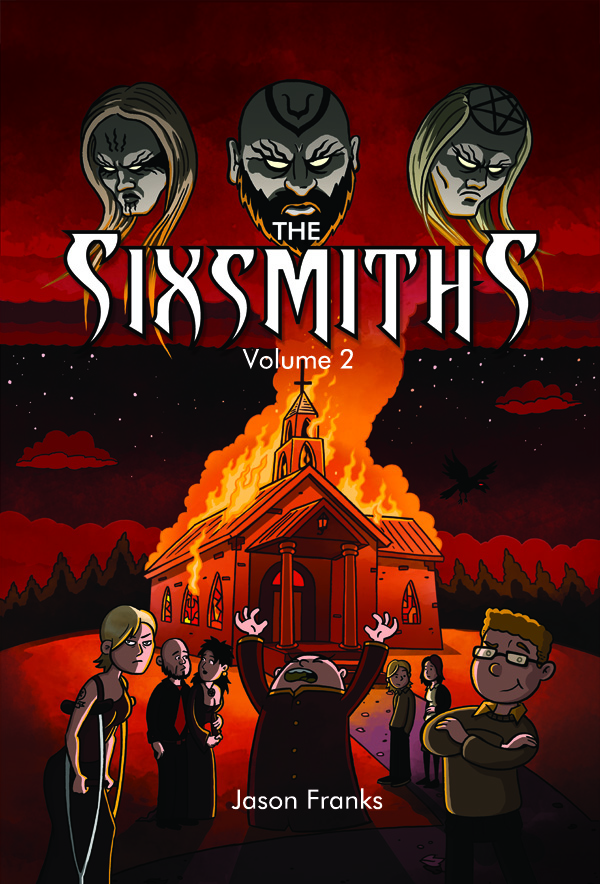 Melbourne writer Jason Franks likes to walk on the dark side . His first novel Bloody Waters, about Clarice Marnier, a young guitar virtuoso who sells her soul to the devil, was short listed for the 2012 Aurealis award.  His McBlack comic series stars a private detective gone bad. But today we’ll be focusing on the Sixsmiths as Franks is about to launch his second comic in the series.

Tell us about The Sixsmiths

The Sixsmiths are a family of suburban Satanists fallen prey to the global financial crisis. Sort of.

Well, they’re not like modern, Anton Laveyan Satanists (who are often really atheists and/or religious freedom japesters). In this world Satanism is a longstanding religion with a history that’s entwined with the other monotheistic faiths (Judaism, Christianity, Islam) with a long history of persecution. The conceit is that they’re just ordinary folks, and their religion could stand in for any one of those religions at different times. Satanism gives us the ability to invert everything and that is a great source of jokes.

The Sixsmiths do practice magic as part of their religion, but there’s no supernatural aspect to the book–it’s a straight-up religious satire.

One thing we really wanted to avoid was becoming a ripoff of the Addams Family, which is to my mind a wholly perfect creation. So instead we decided to rip off the Simpsons and South Park.

What initially inspired you to write about them?
Marc asked me to write a graphic novel for him to draw with the intention of selling it to Slave Labor Graphics, who had published Marc’s two prior books. He came down to Melbourne for a book launch and afterwards we sat down in a cafe to brainstorm over coffee. One of the sketches he did in that session was a depressed-looking teenage boy wearing a pentagram t-shirt–that’s where the original idea came from. That became Cain. Next was the vicar, Melmoth. Ralf was based on a punter sitting at the other end of the cafe and for Lilith, I said “black hair with a white streak.” Annie was more difficult and Marc came up with her on his own. Once we had characters and the setup (“suburban Satanists”) we were most of the way there, we just needed a plot. The subprime crisis in the USA was just rumbling then so I said ‘money problems’. Neither of us guessed that we’d be in GFC by the time the book was ready.

The Sixsmith’s church picnic reminded me of church picnics I went to as a child.  Made me wonder if you’d gone to picnics with religious organizations too.

There are two picnics, sort of, so I’ll tell you about both of them. The blessing after the mass in Unhallowed is inspired by the Jewish custom of having a ‘kiddush’ (blessing) after the Saturday morning service. It’s often sponsored by a family, especially if their son has had his Bar Mitzvah during the service on that particular day. These usually take place indoors but I put it outside because a) I wanted a Churchier feel, and b) because that made it easier for Dennis to gatecrash.

The other picnic–the Festival of Mammon–is based on the annual Chanukah in the Park. I provided Marc with photos of the St Kilda Festival for reference, though, which is why it doesn’t look like Caufield park. We made up the ceremony for maximum silliness.

A bunch of stuff. One of them is a comic called Gourmand Go, which is basically Cannibal Star Trek. I’m finishing off a novel called XDA Zai, which is about an assassin who takes missions in impossible places (fairy land, Atlantis, a dirigible city, etc etc)–but who’s really in it for the travel opportunities. Also a new urban fantasy novel, a sequel, and some other continuing work. My new novel, Shadowmancy, is all done and should be available real soon now.

How do you start out with your stories? In the middle, beginning or end?
Depends. Usually I know the end before I start, and then I figure out the start and just strike out towards it. But sometimes I write everything out of order and then stitch it back together. Sometimes I find there’s more when I get to the end I planned. Sometimes I get to the end and then figure out exactly what happened, which can be a bit of a weird feeling.

What’s your writing process for comics and for books?
I’m usually a bit more structured in the way that I write comics, because you’re so limited by the format and the available pagecount. Usually I’ll have a good outline of what happens where and I’ll do page-by-page breakdowns before I start writing scripts. There’s a lot more planning with comics.

With prose I prefer to freewheel it more. I usually have a structure in my head but I like to leave myself room to discover more about the characters and the world. That’s the big difference, I guess: there’s a lot more room in prose.

Do you throw a lot away?
Not as much as I used to, but yeah, I do, especially in prose. I usually write more than is necessary in the first draft and then come back through and move stuff around, cut everything back. Usually this amounts to 10% of the wordcount on each draft. Satanist or no, being boring is the biggest sin for a writer.

Do you write every day?
I would if I could, but alas not. I do try to do some writing-related activity every day, but often this is non-creative stuff like updating websites or chasing up editors or artists.

Are you a planner or do you fly by the seat of the pants?
I guess I’m a pantser by nature, but I usually have an informal plan in my head, even if I don’t have one on paper. Every project is different, though.

How do you go with social media? What do you do to increase interest in your work and how much time do you spend on it? Any tips?
I’m pretty rubbish at it. I spend probably too much time on facebook and not enough time on twitter–hard to quantify how much time I spend because I check it throughout the day when I get some idle time. I don’t sit down and say “now I’m going to do social media,” which perhaps I should, so that I can meter my time… but I also think it’s a mistake to look at it as a marketing exercise to the exclusion of all else. Nobody wants to engage with you if you spend all day begging you to look at their work. Be a person who talks to other people and occasionally talks about their own work.

What 3 artworks (books, music, visual arts, films) have most inspired you?
Only three? Twenty wouldn’t be enough!

Ok, today my three are:
Roger Zelazny’s Amber cycle. I’ve just reread it for… well, I don’t know how many times I’ve read it, and it’s still fresh and smart. It’s so much a part of my DNA as a writer that I don’t even realize it any more.
Tom Waits’ album Bone Machine is something I keep coming back to. Aside from the brilliant songwriting I just love the sounds of it. It’s like a Disney villain gets drunk on the way to the circus and goes stumbling around a foundry. As dark as the album is, it’s also comical and hugely entertaining.
Being John Malkovich is one of my favourite movies. Charlie Kaufman and Spike Jonze take a surreal premise and build something that’s completely logical and meaningful out of it. Also, it’s goddamn hilarious. 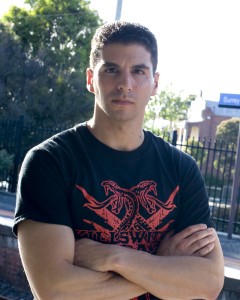