is due to be launched next Wednesday (March 30) 6.30 for 7.00 at the Penny Blue Bar Drivers Lane (off Little Bourke Street, near Elizabeth St) Melbourne VIC 3000

Tell us about The Adventure of the Colonial Boy. What inspired you to write the actual adventure element of the story?

When I’m writing romance, I’ve always got an action/adventure element of the plot around which the characters are interacting – I love for my people-in-love to be having adventures together. This being a take on a Sherlock Holmes story, I’ve always loved the mysteries as much as the friendship, so it was natural from the start that there should be a mystery/adventure part of the story.

I wanted to set it in Australia for a couple of reasons – easier for me to research, for a start – but primarily it was because I thought that if they’d been repressing their feelings for each other for a decade in the framework of London, then something had to change dramatically to allow those feelings to surface. There had to be emotional triggers, but also for them to be in an environment which was new to them, to shake things up.

As for the plot itself – Conan Doyle’s stories suggest that John Watson lived for a time in Australia (he refers in The Sign of Four when he sees the Sholto’s yard dug up in search of treasure, that he’d seen diggings like it in Ballarat).  So I worked out a history for Watson that informs the choices he’s made and the person he’s become. The title refers potentially to a couple of characters, actually, but primarily, the Colonial Boy is John Watson.
I knew I wanted to include elements of non-white history in Australia, hence the Chinese connection. I also looked to Arthur Conan Doyle’s stories (which I’d read in full before writing The Adventure of the Colonial Boy) for some of those mysteries that were only ever hinted at. The red leech and the horrific death of Crosby the Banker were mentioned in the same sentence and sparked some ideas, so they became the prompts to inform the plot.

Then it was a matter of folding in themes of identity and repression, a splash of Moriarty’s old gang and the idea that John Watson is an unreliable narrator. Conan Doyle notoriously had no damns to give about continuity, and I worked that in as a deliberate choice on Watson’s part.

I wonder if writing same sex male erotica is about women secretly wanting to be as sexually free as men but not being able to express it with a female character. What do you think?

It’s certainly one possible element, but not the only one. There are ideas about sexual freedom there; ideas about two characters having equal agency that sometimes we feel can’t be quite achieved between a hetero couple, though that depends a lot on the writer and on the couple! I think there are ideas in it about women liking to see men in touch with their emotions together. I think there’s just an enjoyment of two hot men being in love and sexual together. I mean – it’s just sexy! 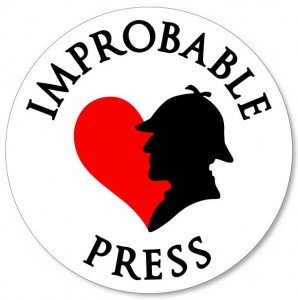 There’s certainly a long history of queer readings of Holmes and Watson. That has really come to the fore since the BBC Sherlock series, which plays with that idea so much, though they’re not the first to tease with queer subtext.

Basically, though, I think it’s valid to read the relationship as Epic Best Friends OR as Epic Lovers. Their friendship and relationship has fascinated people for over 120 years, and this is just another iteration of that – that people like to read about an epic love story of different-but-equal characters, and their gender doesn’t really matter in that respect. We just love to see two people in love. And having adventures together.  Well, I do. And of course queer history means that people had to look for hidden representations of queerness, since those relationships were generally not openly represented (and not necessarily positively) until the last few decades.

(Seriously, people who say ‘Watson wasn’t gay – he got married!’ are deliberately ignoring the realities of hundreds of years of queer history.)

I submitted an urban fantasy to one publisher, I hae a queer paranormal romance submitted with another, I’m working on a couple of short stories submissions (one for a queer romance collection, the other for a Sherlock Holmes anthology with the Best-Friends interpretation) and I’ve started work on co-writing a new book for Improbable Press!

What’s your writing process for books? Do you throw a lot away? Do you write every day? Are you a planner or do you fly by the seat of the pants?

I used to just write by the seat of my pants – get an idea and start writing to see what happened. It worked for a while, but then it stopped working and it threw me for a six. Now I tend to get an idea, sketch it out, fill in the sketch a bit and then start. I’m not a rigid planner – plenty changes or gets dropped as I go – but I have a basic framework and then fill in the gaps. I think I once equated it to throwing up a frame for a house, but then how the house is fashioned and decorated, and whether you build on an extra room, is fluid and responsive to the ideas going on at the time.

I’d love to write every day, but I have to earn a living too (fiction doesn’t pay that well!) and I want to spend time with my family and friends. But I expect that even on days I’m not sitting down to write in a solid chunk, I’m emailing ideas for dialogue and prose to myself. My brain never stops writing, even when I’m not at the computer. I get antsy if it’s been too many days, actually. I was discussing this with fellow writers on Twitter recently – that itchy feeling in your skin of words building up that can’t get out.

How do you go with social media?

It can be a challenge to find the time. You can’t just plaster links and say Buy My Book. I mean, you do send out those links as well, in due course, but the main thing is to build communities and connections, to participate and engage with people.

It’s great, because you find work and people and ideas you love, and hopefully they’ll also love you and your work and ideas, but you can’t enter into it thinking it’s just an advertising wall. It’s more like a party where you get to mingle, make friends, and you all talk about the cool stuff that’s going on – not necessarily your own, in fact.

I spend a lot of my social media time ALL CAP SHOUTING about other people’s work that I love. So while we’re here, please everyone, read Thrive by Mary Borsellino. Read The Night They Met by Atlin Merrick. Read The Creature Court trilogy by Tansy Rayner Roberts. 😀

What do you do to increase interest in your work and how much time do you spend on it? Any tips?

I write about things that interest me that pop up in my work, and then the hope is that people who also like those things will follow me to see what else I’m doing. I blog about things that spark my imagination or intellect, and I review things as well. I’m always happy to talk to people about things.

With Colonial Boy, I’ve actually been active in Sherlock fandom for a number of years now, which has included writing fanfiction for fun, to deal with writers blocks and to experiment with ideas and styles. A lot of my lovely readers in that sphere have supported me because they like my work already, and have gone and bought the ebook which is already available, and a number have pre-ordered the paperback. They’ve been just wonderful. That’s an environment where people habitualy give encouragement and engage with you by reading the comments. I’ve met some lovely people through those sites, and made some wonderful friends.

But as I said, it can’t just be talking about yourself or your own work all the time. You have to engage with others, share ideas and resources, engage with others about the things they do that interest and excite you. It’s a community and a network of ideas and enthusiasms, not just a Shopping Channel.

I pick up inspiration from so many places – including people I meet, landscapes and cities, that it’s hard to narrow it down.

I listen to music a lot when I write, and the type of music Iisten to changes with the type of book. I do listen to Fall Out Boy a lot. I love their combination of happy melodies and angry lyrics, and musically they change and grow with each album, and I love that capacity in them.

An artist I found inspirational was Lin Onus, an indigenous artist who did work that was likewise angry/funny. His X and Ray series is fantastic. He did beautiful work, and funny work, and work full of rage, as well as whimsy. He died much too young and is a huge loss.

Of course there are a lot of books I find inspirational. The original Sherlock Holmes stories and the great Holmes-Watson friendship, which can be interpreted as a great love story is an obvious case in point. I’ve also been very inspired and influenced by Lois McMaster Bujold’s Vorkosigan series, and the humanist philosophy behind it. 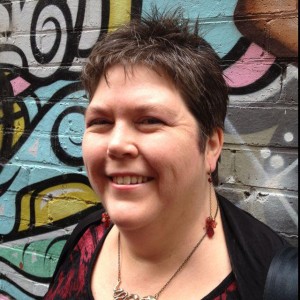 Find Narrelle at the following sites:

Or you can email.

The Adventure of the Colonial Boy

Already got your copy? A review of one or two sentences onAmazon and/or Goodreads can really help!