If you want to go somewhere you’ve never gone before – try Adam Browne’s writing.  I’ve plunged through the solar system in glorious adventure with Cyrano De Bergerac in Pyrotechnicon, watched a wonderful animation by Adam Duncan based on one of Adam’s short stories called The Adjustable Cosmos (Hapsburg Emperors in the stars) and now I’m all prepared for the launch of his next book The Tame Animals of Saturn on June the 9th.

It was inspired by the writings by and about Jakob Lorber, a 19th Century Austrian mystic who was given to know the animals and plants of the Solar System. It’s richly illustrated.

I hope to revive interest in him, not as a Christian or a theosophist – he was both – but as a beautiful and tireless fabulist.

What was your initial inspiration for the book?

Thirty years ago, in The Book of Imaginary Beings, I read of Lorber’s ‘Leveler’. Borges writes with great dry wit of the immeasurable service the Leveller does man. Its pyramidal legs are made by God to stomp out roadways in preparation for the tarmac-layers and so on. It’s only with difficulty that I acknowledge there might be some people who aren’t immediately captivated by things like this. Lorber has stayed with me ever since. The book was a side-project, but it was one I had to do.

The Leveler by Adam Browne

You love to explore the odd laneways of speculative fiction. How do you find your way into these laneways?

When I was young, science fiction seemed to be about freedom. There seemed to be few rules – just a playground for ideas. I remember being disappointed when a writer or filmmaker borrowed from elsewhere.2001: a space odyssey was a model of originality, but rather than copy its example, filmmakers copied the film itself. It’s still happening now, likely under the guise of homage – but it’s antithetical to the whole sf ethos. Anyway – I dunno – I don’t see my writing as weird anyway, to be honest. I haven’t admitted this before, but I was surprised when people called my stories New Weird or whatever. For me, they were just the stories I wanted to write.

What’s your writing process? Do you throw a lot away? Do you write every day? Are you a planner or do you fly by the seat of the pants?

My stories start at the start. There’s some initial idea – with an old one, for instance, called Neverland Blues, it started with the idea that Michael Jackson had fled his problems by turning himself into a spaceship. The story accreted from that. I write from the seat of my pants. And yes, I throw a lot away. Each story has a discards file which is inevitably much bigger than the story itself.

How do you go with social media? What do you do to increase interest in your work and how much time do you spend on it? Any tips?

Yeah social media. It’s such an easy way to advertise your work but maybe not so effective. Still, although there must be better ways to do it, the urge to become skilled in marketing remains a velleity.

Facebook is my guilty obsession. At its best it’s a wunderkammer, and a way for me to vent excess imagination and gags – also an excellent way to resume or maintain friendships … but I suspect the reason I find it so seductive is because it’s all about me. Almost everything I read on it is in some way related to something I’ve already said. That’s the way it’s designed. It’s the equivalent of those kids’ books where your child’s name is inserted into the text. It enables my narcissism. 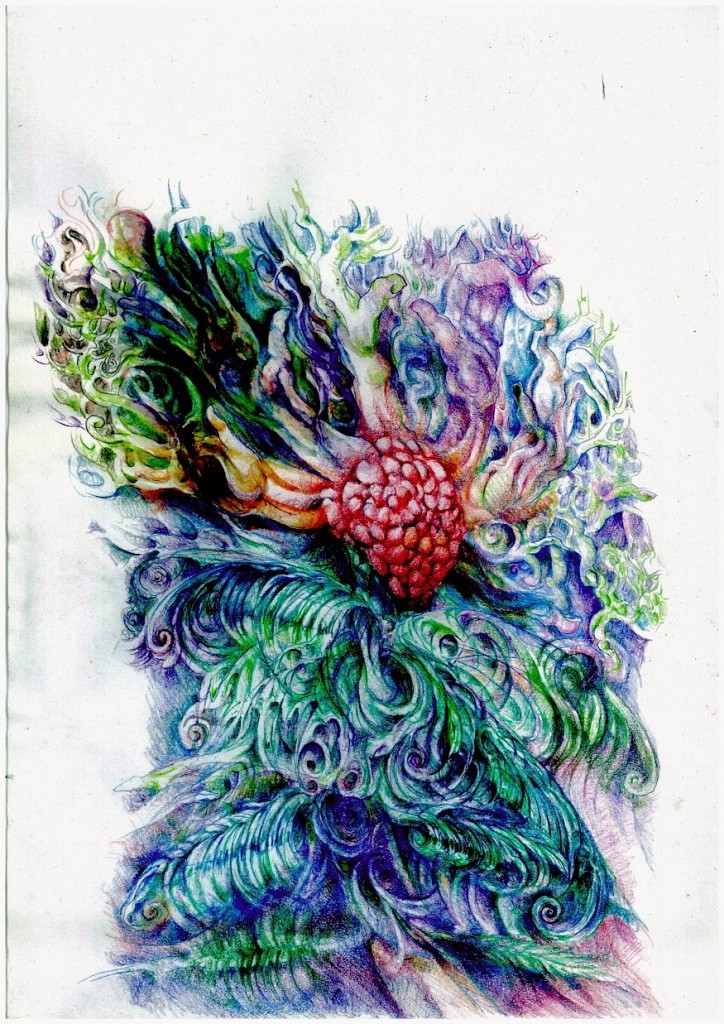 The bhura flower, native to Saturn by Adam Browne

What artworks (books, music, visual arts, films) have most inspired you?

I’ve been thinking recently about how 80s art-pop was a sort of gateway drug into the arts. Devo, Talking Heads etc etc. I remember being delighted by a performance art piece that made its way onto Countdown – a pingpong game with people’s heads sticking out of the table, players in whimsical dress, a bit of a ceremonial vibe. It wasn’t the piece so much as that such stuff was possible… My father took me to all the great art films of the 70s too. 2001, Satyricon, Tarkovski etc etc. There was 2000AD, the British comic antho – then Heavy Metal magazine – and Raw. There was the French comic book artist Moebius. And Fantastic Planet – then the art of Roland Topor, who designed that film – I’m afraid I’m just listing the usual suspects here – in which case I might as well mention PK Dick, whom I discovered when I was 15, on a trip to the Northern Territory: the first story of his I read was ‘Nanny’. Such a gem. It’s hard to find writers these days who delight me as much as he did. Martin Amis is one, but I have to be careful not to copy his style. Another usual suspect: WS Burroughs – a ‘writer of good bits’, as Amis called him – for me, the good bit, the inspiring bit amid the dross, was the vignette with the Sailor, in the bar, an astronaut, it felt like, purchasing a drug stored in dull grey tubes of lead, cracking it open, his face melting to absorb it…

And now for the tabloid question.  What is your relationship with Bessie Bottomley, Librarian extraordinaire?  https://www.facebook.com/profile.php?id=100009898788233

I find Bessie Bottomley to be very adept at satisfying my holds.

The Tame Animals of Saturn is a available from http://www.peggybrightbooks.com/new/

One thought on “Adam Browne – Interview”